On May 12, Ohio University Heritage College of Osteopathic Medicine (Heritage College) graduated the largest class in the college’s history – 178 students across two campuses in Athens and Dublin.  Included in the class is the first cohort of students to attend the Dublin campus. With significant funding from the Osteopathic Heritage Foundation, alongside their pre-eminent education partner, OhioHealth, and with the city of Dublin as a partner, the Heritage College opened its campus in Dublin in 2014 with the intent of training outstanding individuals from Ohio who would stay in the state to practice, especially in central Ohio and in primary care and other high-need specialties. 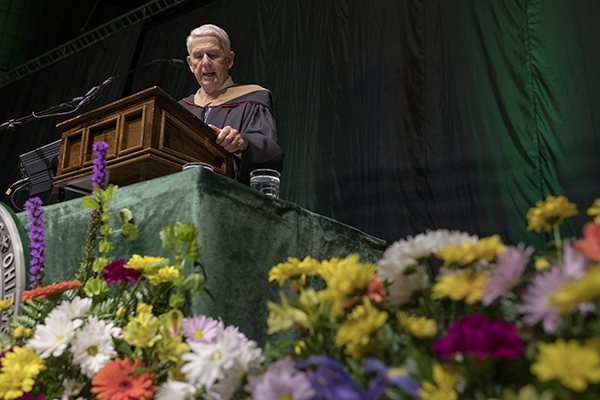 Forty-eight of the 50 members of this inaugural class from the Dublin campus participated in the Commencement ceremony in Athens, with two members of the Class of 2018 having accepted offers to serve as Primary Care Associates, spending an additional year at the Heritage College as junior faculty before graduating. Almost 70 percent of the Dublin graduates matched to residency programs within Ohio, and 37 percent of these graduates matched to central Ohio programs. Fifty-eight percent matched into programs within the college’s statewide Clinical Education Network. Sixty percent are pursuing careers in primary care medicine. Forty-six of the 48 Dublin graduates were recruited from Ohio. Among the graduates is one of the first to train in the new family medicine residency program at OhioHealth Dublin Methodist Hospital.

Rick Vincent, Chief Executive Emeritus and Director of the Osteopathic Heritage Foundations, delivered the keynote address at the May 12 Heritage College Commencement Ceremony in Athens. Vincent told the graduates, “Your older alumni colleagues with whom I’ve worked have been not just kind and compassionate physicians, but kind and compassionate people. I challenge you to follow the tradition they established of providing high quality compassionate care, consistent with the heritage of osteopathic medicine.”

Under Mr. Vincent’s leadership, the Foundation approved the transformational $105 million award to the Heritage College in 2011, Vision 2020: Leading the Transformation of Primary Care in Ohio. The founding of the Dublin campus was a cornerstone of the award, which also included initiatives intended to increase the number of primary care physicians practicing in Ohio; advance clinical research, care, access and training; strengthen community outreach; and support the development of a consortium of central Appalachian colleges of osteopathic medicine.