The mission of the Osteopathic Heritage Foundation (the Foundation) is to improve the health and quality of life in the community through education, research and service consistent with its osteopathic heritage. To advance both our mission and osteopathic medicine and its defining whole person perspective, the Foundation has prioritized investments in scientific research and professional development at top-ranked colleges of osteopathic medicine with the goal of advancing scientific discoveries, health care and delivery. One such investment into research directed by Dr. Robert G. Nagele has led to groundbreaking discoveries that have the potential to change the way physicians diagnose and treat diseases, including Alzheimer’s disease.

Investing in the Future of Patient Care

Investing in scientific research and discovery designed to make a difference in patient health and care is central to the Foundations’ mission. Dr. Nagele’s research is a prime example of how discoveries in the lab at colleges of osteopathic medicine can have a widespread impact on patients’ diagnosis and treatment, and ultimately on their health.

Autoantibodies in the blood can be used to detect early Alzheimer’s disease in individuals when they first arrive in their doctor’s office with an initial cognitive or memory complaint.

The Future of Patient Care:

This discovery is being used to develop a diagnostic platform for the early detection of not only Alzheimer’s disease but also an array of other diseases.

Dr. Nagele recently spoke with Cheryl Graffagnino, Program Officer at the Osteopathic Heritage Foundation, about his research and how the Foundation’s support helped to advance an important scientific discovery.

What scientific discoveries have been made by the Nagele research team at Rowan University?

About 10 years ago, my research team at Rowan made an important and unexpected discovery. We found that all humans throughout their lives possess thousands of antibodies in their blood that are self-reactive, called autoantibodies. This finding was unexpected because it is widely believed that the immune system is designed to fight disease by producing antibodies against foreign invaders (e.g., viruses, bacteria, etc.), not self-reactive antibodies that bind to things produced in our own bodies. Considering that Mother Nature is very clever, it was clear that the presence of so many autoantibodies in the blood must have an important function. We suspected their purpose is to clear debris that enters the blood daily due to normal body wear and tear. The fact that all mammals tested thus far (rats, mice, cows and pigs) also have similar complex autoantibody profiles strengthens this possibility, as does our later work on disease diagnostics described here.

How did the Osteopathic Heritage Foundation’s funding investment help you and your team identify ways this new discovery could impact patients and their care?

In 2013, the Osteopathic Heritage Foundation approved an $800,000 funding award to Rowan University to support our completion of a pivotal study which indicated that autoantibodies can be used as blood-based biomarkers to detect early Alzheimer’s disease-associated pathology in individuals at the mild cognitive impairment (MCI) stage, the stage when they first arrive in their doctor’s office with an initial cognitive/memory complaint. In this study, a small drop of blood was evaluated from 236 subjects, including 50 participants with confirmed MCI due to early-stage Alzheimer’s Disease. Results supported our prediction that autoantibody biomarkers could be used to distinguish early-stage MCI patients from normal healthy controls with high overall accuracy (>90%). These same biomarkers were also capable of distinguishing MCI patients from those with more advanced, moderate Alzheimer’s Disease. Lastly, these biomarkers could distinguish MCI subjects from patients with other neurological (e.g., Parkinson’s disease and multiple sclerosis) and non-neurological (e.g., breast cancer) diseases. Since 2010, we have secured more than $3.7 million through Rowan, including nearly $2.5 million from the NIH. In addition, nearly $8 million has been secured by Durin Technologies, including nearly $7 million provided by Breakthrough Diagnostics, LLC. This support has led to the filing of 24 patents and patent applications and 15 research articles published in peer-reviewed journals.

How did this discovery lead to a potential blood test for Alzheimer’s and other diseases?

Based on these initial findings and with funding from the NJ Health Foundation’s Venture Capital Group, we were able to create a start-up company (Durin Technologies, Inc.) which licensed the autoantibody technology from Rowan University. Grant support from the Michael J Fox Foundation allowed Durin to run preliminary studies that led to the initial designs for some of Durin’s blood-based diagnostic tests.

These pilot studies showed that, in healthy individuals, autoantibody profiles can remain remarkably stable for many years. However, autoantibody profiles in the blood change in a predictable way in response to the presence of disease. For example, in Alzheimer’s disease, many neurons continually die over time, leading to the constant release of brain debris that eventually makes its way into the bloodstream. The immune system detects this debris and responds by producing more autoantibodies that can remove this debris from the blood. Because the debris generated by Alzheimer’s disease is similar in all people afflicted, the autoantibodies that become increasingly prevalent in the blood are similar from one person to the next. It then becomes possible to detect changes in the levels of these specific Alzheimer’s disease-related autoantibodies in a simple blood test, and to use these changes as biomarkers to confirm that the disease is present.

Even more exciting, since Alzheimer’s disease-associated debris production can begin up to a decade before symptoms appear, it may be possible to detect the presence of Alzheimer’s disease-related pathology in the brain long before symptoms appear, when treatments could provide the most significant medical benefits. Lastly, because nearly all diseases generate disease-specific debris from the body organs or tissues affected, we have shown that this is a multi-disease platform diagnostic strategy that is not limited to neurodegenerative diseases. We are excited to report that we have also been successful in identifying and testing early-stage biomarkers for Parkinson’s disease, Multiple Sclerosis and Psychosis, which are currently being developed into diagnostic tests by Durin Technologies.

How did conducting this research at a college of osteopathic medicine and the osteopathic profession’s focus on treating the whole person impact your work of translating this scientific discovery into patient care?

First, I would like to credit the Dean of Rowan SOM, Dr. Thomas Cavalieri, D.O. and the Director of the NJ Institute for Successful Aging, Dr. Anita Chopra, M.D., for having the foresight and being “open-minded” enough to create for me what I consider to be a unique research environment. This environment offered true academic freedom and prompted the “out of the box” thinking that was necessary for me to make these discoveries and participate in translating them into something clinically useful. It is rare for a basic scientist to have this experience and then very gratifying to see it evolve into something that potentially has great and widespread clinical impact. Having the privilege of being a basic scientist in a clinical (Geriatrics) department and interacting daily with physicians who care for and treat the elderly, for me, was a constant reminder of the importance of what I was trying to achieve and what it could mean in terms of improving the quality of life for the elderly who are under their care.

How will these findings impact medicine and patient care in the future?

If successful, these diagnostic tests will enable early disease detection and allow early treatment. Early treatments have the greatest impact in slowing disease progression because they can be initiated before too much tissue devastation has occurred. These diagnostics will also allow earlier patient enrollment and treatment in clinical trials for testing new drugs. It will also make it possible to monitor disease progression in individual patients by comparing autoantibody profiles before and after treatment, allowing physicians and researchers to confirm that a chosen therapeutic strategy is working.

Our goal, now being implemented by Durin Technologies, Inc. and its scientists, is to develop a multi-disease diagnostic platform. Since evidence thus far indicates that each disease induces consistent and characteristic changes in blood autoantibody profiles, we hope to be rolling out diagnostic tests for many other diseases, all with the goal of early detection so that patients can have access to treatments at an early point in disease progression. If we are successful, this would be a major change in the way diagnostics are done in the US and throughout the world. 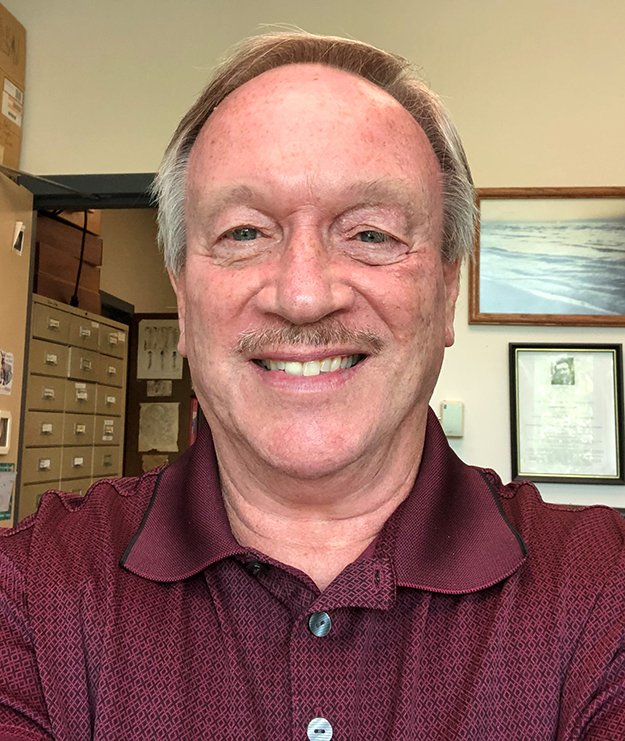 Professor of Geriatrics and Gerontology in the New Jersey Institute for Successful Aging at Rowan University and the Founder and Chief Scientific Officer of Durin Technologies, Inc., 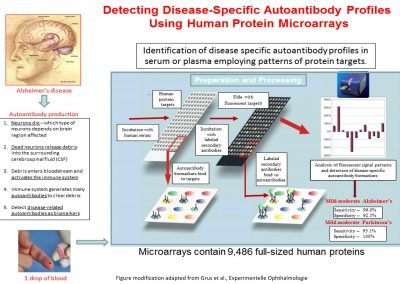 Pioneering the use of virtual reality to improve the lives of patients with diabetes. 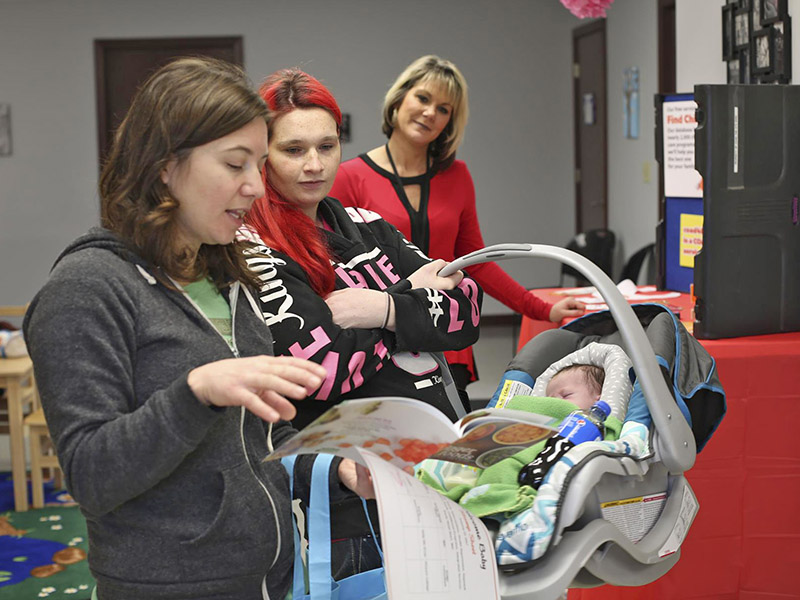 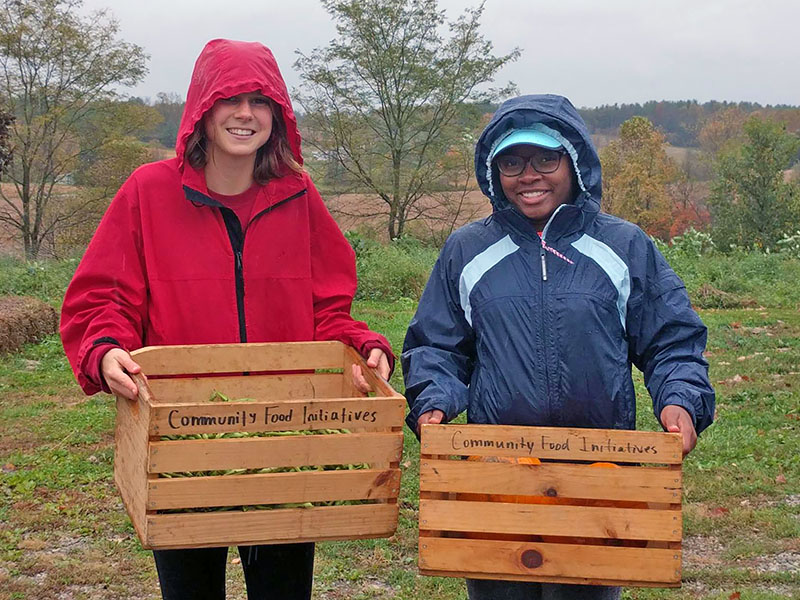 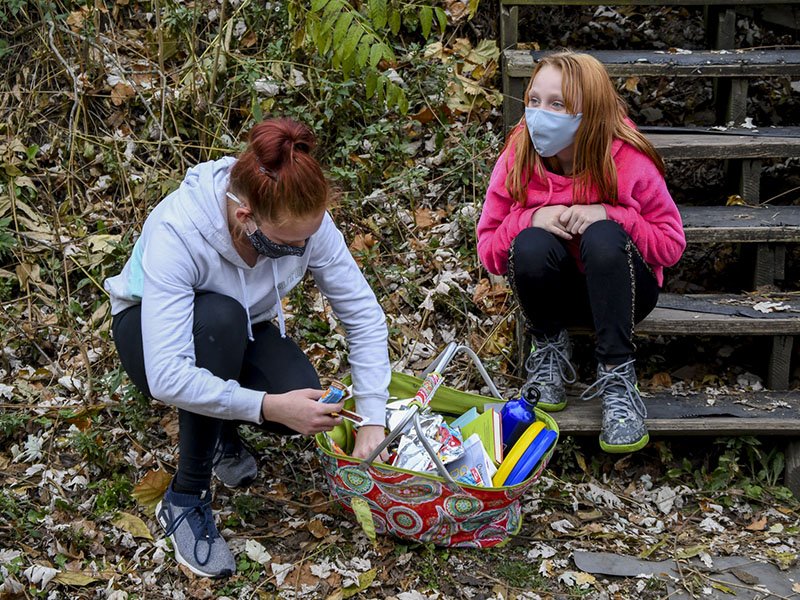 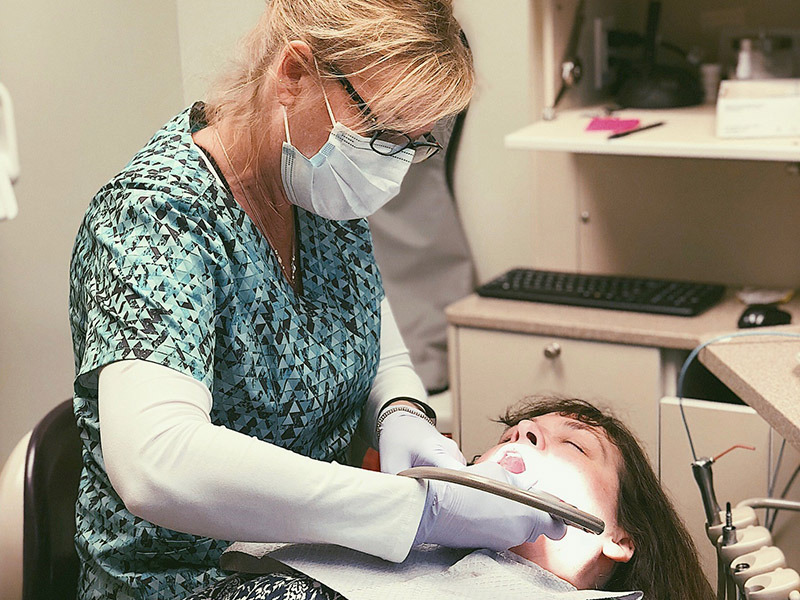 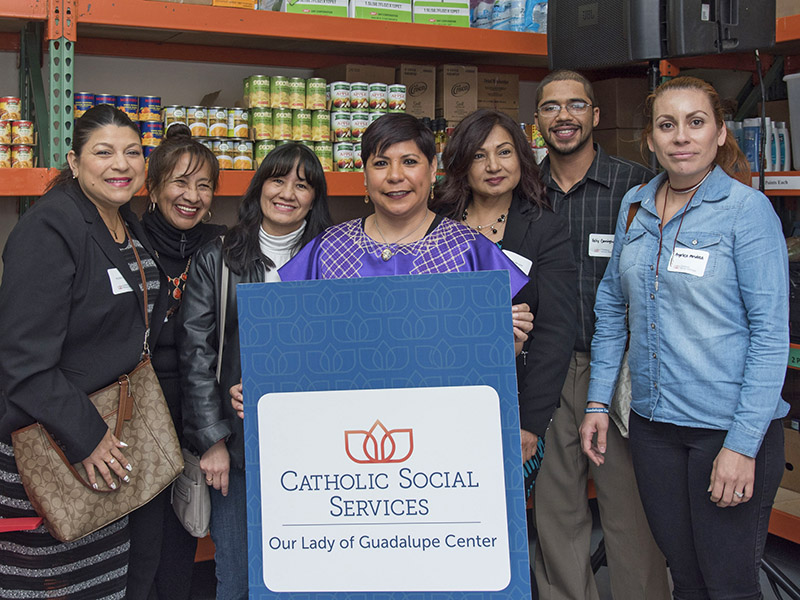 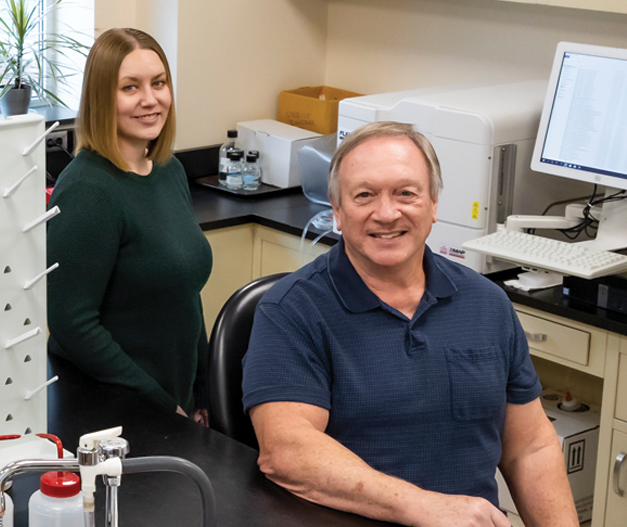 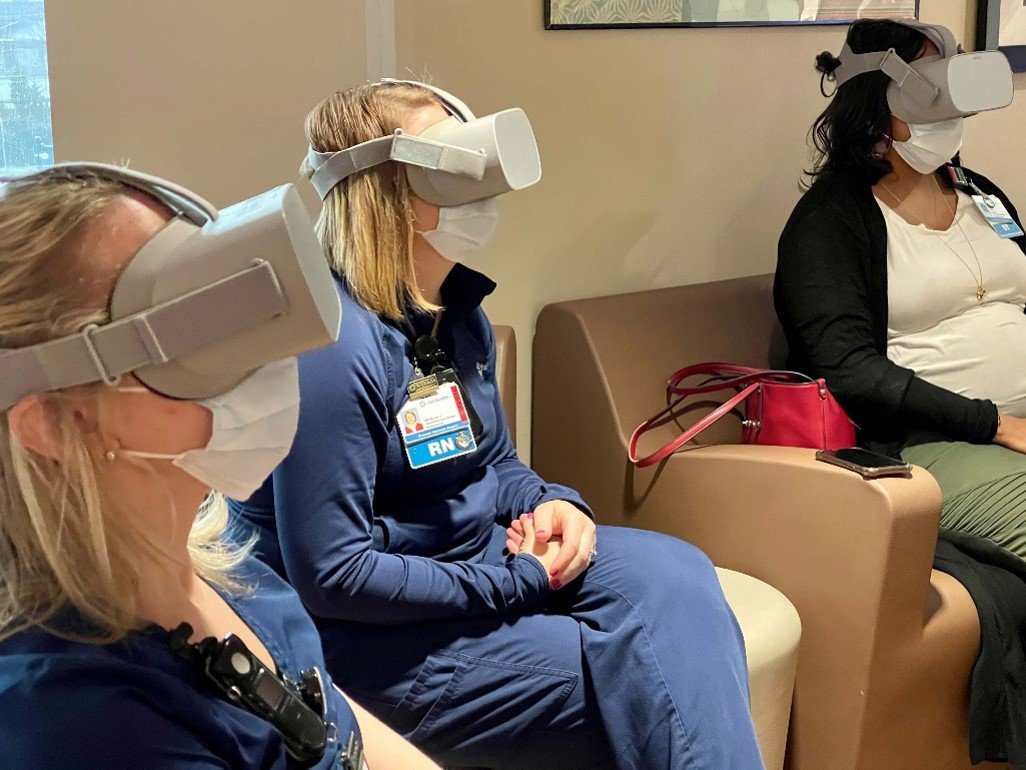